Dutch elm disease (DED) was first detected in The Netherlands (1919), this being the reason why the disease is called DED. However, the disease had first emerged in France (1918) as revealed by citations discovered afterwards. The forest engineer and pathologist Benito Martínez was the first person to detect this disease in Spain. He detected it in an elm forest in Madrid in 1932. He called the disease “grafiosis” in Spanish, adapting to this language the first scientific name that the disease causal fungus had, Graphium ulmi Schw. (1922), which is now known as Ophiostoma ulmi.

The causal fungus of the first DED pandemic was O. ulmi. Spain was less affected by the first epidemic than Central and Northern Europe, in part due to a certain level of resistance to the disease shown by Spanish elm populations. It is estimated that 10 to 40 % of elms died in this first pandemic. Only those elms that escaped infection or were capable to resist and overcome it survived the first pandemic. However, they did not last long since a second pandemic appeared around 1940. This one was caused by a new fungus, Ophiostoma novo-ulmi (with two subspecies, subsp. novo-ulmi and subsp. americana), a more virulent pathogen better adapted to warm climates and, therefore, much more harmful to Spanish elm stands.

The pathogenicity of O. novo-ulmi and its rapid expansion caused a social alarm as many of the centenary elms growing in the main squares of many villages and towns died. It also aroused the interest of scientists and foresters, who decided to study the disease and in order to know how to fight it.

The Dutch Elm Conservation and Breeding Program, which started in 1930, was the first to study this disease and the mechanisms to fight it. Later other European and American programs joined efforts with the Dutch Program. The Spanish Elm Conservation and Breeding Program (SECBP) started in 1986 due to the initiative of the ICONA (Spanish Institute for Nature Conservation, now called “D. G. de Desarrollo Rural y Política Forestal” which belongs to the Spanish Environmental Ministry) and the School of Forest Engineers of the Technical University of Madrid.

The efforts of the SECBP initially focussed on understanding the disease. First the abundant literature on DED was reviewed, analysing it under the scope of the particular environmental conditions of the Iberian Peninsula. Later the SECBP studied the three agents involved in DED: the host (elms), the pathogen (fungi) and the vector (beatles). Additionally, the Spanish Administration was in charge of developing appropriate measures to control infected timber and its trade.

The intensity of the infection and genetic variability of affected elm forests were evaluated. Samples were collected from infected elms all over Spain in order to study the pathogen. A total of 32 Ophiostoma spp. strains were characterized and included in a fungi collection. Over the years, this collection has increased to 90 strains. In addition, in order to evaluate how to control the vector, Scolytus spp. beetles were captured from central Spain and their life cycle studied. Experiments were also performed with different baits/traps and agricultural insecticides in order to evaluate their feasibility for controlling these beetle populations. The results of these first experiments showed that there were no safe and effective treatments against DED fungi and their vectors. 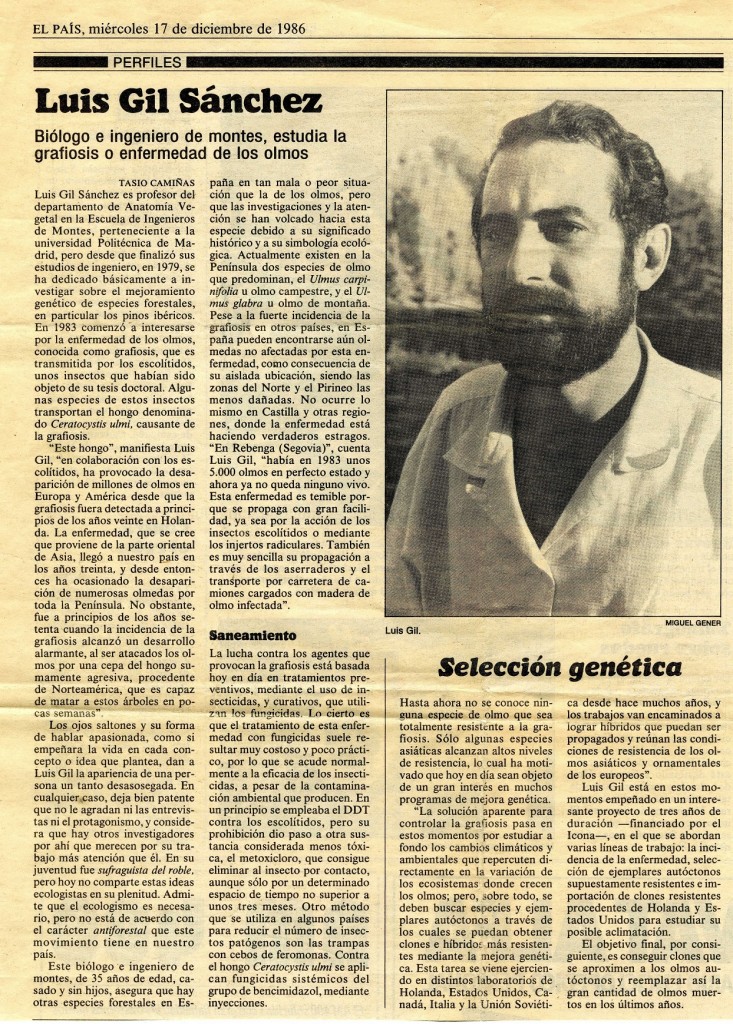 Therefore, the SECBP’s attention focussed on those elms that were not affected by DED. Where these elms resistant to DED or had they not been detected by the beetles that propagate the disease? The bark beetles’ feeding behaviour was investigated. Factors such as tree shape and the production of volatile hormones were involved in the detection of healthy trees by beetles. Additionally, some chemical compounds of the bark were discovered to be feeding deterrents.

Nevertheless, what factors were related to DED resistance in elms that had been infected but had survived the disease? Unravelling these factors resulted more complex than expected. Some resistance factors were genetic (eg., smaller xylem vessels and greater capacity of compartmentalization hinder the pathogen expansion) and others environmental (eg., during drought years the vessels of the current growth ring are smaller conferring the tree greater resistance to pathogen expansion). These anatomic characteristics are the ones that explain why young trees (with smaller vessels) are less affected by DED infection. On the other hand, endophytes growing within the some elms could interact with Ophiostoma spp. or activate the trees’ defence responses conferring resistance to DED. Some trees that tolerate the disease in the field resulted to be highly susceptible to the disease when clones propagated from these were artificially inoculated in a nursery. This was indicative of other environmental factors that are related to DED resistance.

The first artificial inoculations performed also revealed that seedlings had to be over 3 years old for DED symptoms to relate to those shown by a mature tree. This increases the time required for testing the susceptibility of genotypes and complicates studies. However, the development of new molecular tools is enabling the program to overcome some obstacles and to perform some studies that before could not be carried out.

Until now the only really effective way to fight DED has been identifying and breeding resistant genotypes. Therefore, one of the main objectives of the SECBP has been studying the genetic diversity of Spanish elms. This allows selecting the most adequate individuals for the conservation and resistant elms breeding program. Hopefully, this approachwill allow restoring elm forests successfully.

During the last 29 years, the SECBP identified and selected many healthy elms growing in areas where DED waspresent. These were propagated sexually, clonally or by in vitro micro-propagation techniques. The resistance of these genotypes was tested when they reached the adequate age and size for being artificially inoculated with DED. Their wilting levels and recovery after infection were evaluated. Those that showed high tolerance to the disease were characterized (growth rates, morphology, phenology,…) and selected for the breeding program. The seedlings obtained by these controlled pollinations among resistant elms were subjected to the same resistance trials and characterization. The time required for evaluating each clone takes about 10 years. Currently, as a result of the hard work performed over the years, seven clones have been selected due to their high resistance to DED. These clones have been registered as forest reproductive material so that they can be used in reforestations and restoration programs.